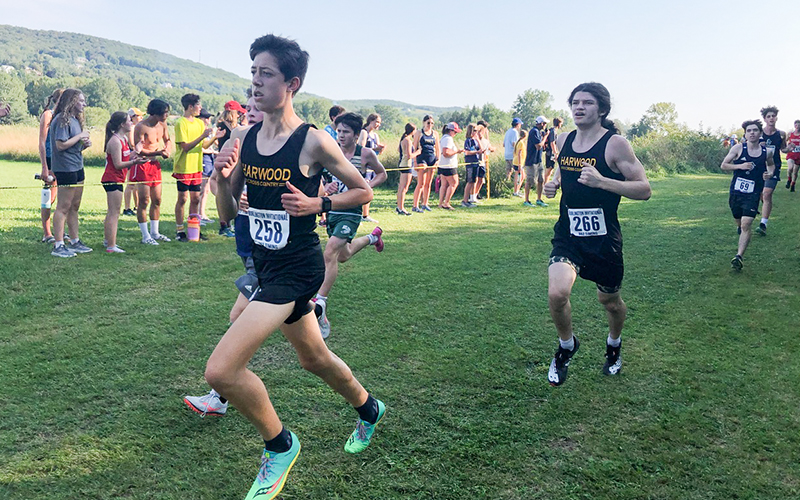 
Due to issues at Burlington HS, for the second year in a row the races were held away from the Burlington/North Beach campus. The BHS Invitational was held at Hard’ack Ground in St. Albans. This is the same course that UVM uses for their home cross course.

The weather conditions were not ideal for a 5 km race on a flat, open and sunny course. Temperatures were in the 90s with high humidity. Several riders from opposing teams collapsed in the heat and were unable to finish.

“Even though our riders were stressed, all of them were able to finish. Team captain Charlie Flint gave his team members adequate warning and they listened. All of our runners were properly hydrated,” Kerrigan said.

“We are a much smaller and younger team than what we had in the past. There are only two seniors among our 24 participants. Due to our youth, lack of experience, injuries and the fact that the course was unfamiliar and very flat, I did not expect exceptional results,” said Kerrigan.

Harwood’s maiden team surprised coach Kerrigan with a sixth-place team finish, finishing just 20 points behind third-placed Essex. The CVU girls won the varsity race. Charlie Flint made it to the podium with a sixth-place finish among some of the top runners in the state. Placed Julia Thurston (15), Maisie Frank (26), Hazel Lillis (39) and Libby Spina (56) backed up Flint’s strong result.

The varsity boys placed 10th among the mostly D 1 teams. Harwood had three sophomores and a junior in the top four. They were led by sophomores Indy Metcalf (28) and Chris Cummiskey (40), junior Quinn Smith (41), sophomore Lincoln Gage (49)

In JV racing, freshmen Chapin Rivers and Pippa Diller made strong debuts in their first high school races, Kerrigan reported. Rivers finished 28th in the JV boys and Diller finished 20th in the JV girls. There were over 120 runners in each of the four races.

Harwood XC will take part in the U-32 Invitational this Saturday. The U-32 men’s and women’s teams are ranked in the top three in Vermont. Start of the races at 10 a.m. on the Montpellier Est campus.

Animal of the month: Charlie