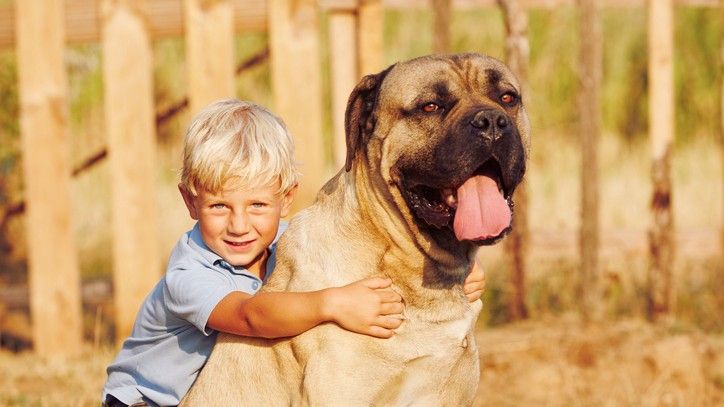 Watch: Should you train a Cane Corso to protect your children?

Cane Corsos often get a bad rap, but is that just due to their innate sensitivity and willingness to protect those they love?

A TikTok video showing a couple’s pet Corso Rip defending their child when his father claims to be violent has gone viral thanks to Rip’s immediate and stern warning.

Sarah_rue1 posted the video on TikTok with the caption “Rip is a born protector. (9 month old Cane Corso)” and a tag on the video that read “Look how well our Cane Corso is protecting our son.”

The video shows a very young boy and his father shaking hands and hugging with Rip sitting in bed watching them. Then the father jostles the child (acting, of course!), in order to simulate a threat to the boy. Immediately the dog leaps up and grabs the dad’s arm to defend the child.

Unfortunately, Corsos and other Mastiffs are often referred to as aggressive dogs, but as we can see from the video, the puppy shows no aggression towards the man, but simply prevents him from touching the boy, pushing him away.

Dog lovers praised the video for showing the dog’s protective nature, and Rip earned a lot of respect and admiration.

Moriahjane286 comments, “I love that his tail is still wagging like ‘let’s relax bro here, I’ll help you control your hands, just relax for a second’ such a good dog!”. While Nomoreabuse2021 adds: “He’s like uh no sir, let me show you the door. Big dog“.

“This dog was watching you just waiting for a reason. And I like that he wasn’t really aggressive, just company – you’re done,” observes Jennifer McIntosh. Becca also remarked on how sweet the dog is: “I’ve watched this 100 times…he’s perfect. Body language, understanding the force to be used? Beautiful.”

Other dog owners have observed similar behavior in their own pets. Paige explains: “Me and my son were playing one night I guess my Cane Corso thought it was too hard and kept watch over him when he was lying on the floor lol.” While Lead Rayne863 says “I have a Cane Corso too, we can’t even tickle the kids because he thinks we’re hurting them, best pet ever!!!”, l ‘OP exclaiming that the breed is “so sensitive!” ”

However, some were less enthusiastic. Dani commented: “Couldn’t be a worse idea. What happens when your son and another child play wrestling? To which the OP replied, “We have other kids all the time and two more of our own. He is very gentle with them. He has a good temperament and is well socialized.

Rip’s protectiveness of his mother and siblings can be seen in more detail with the family’s “tortilla challenge” video below.

While this protection is natural in a pack animal and Rip shows no signs of aggression or acting possessive in the video, it’s also important to look for signs of guard resources (with any dog), as this can be a much more problematic and aggressive behavior that needs to be nipped in the bud quickly.

There’s no sign in this video that Rip views his brother as a resource, he’s just making sure he doesn’t get hurt. But, when adopting a new pet, it is important to watch out for puppies becoming defensive and possessive and trying to pull you away from any object; most often food, treats, toys, a bed, or even a person. They will exhibit behaviors such as growling, lunging, or biting.

Check out Sarah_rue1’s Tiktok for more adorable videos featuring Rip and his three human siblings, including his very first Halloween!

Dogs of different sizes 2022: Here are the 10 smallest and largest affectionate dog breeds in the world – from Chihuahua to Saint Bernard 🐶