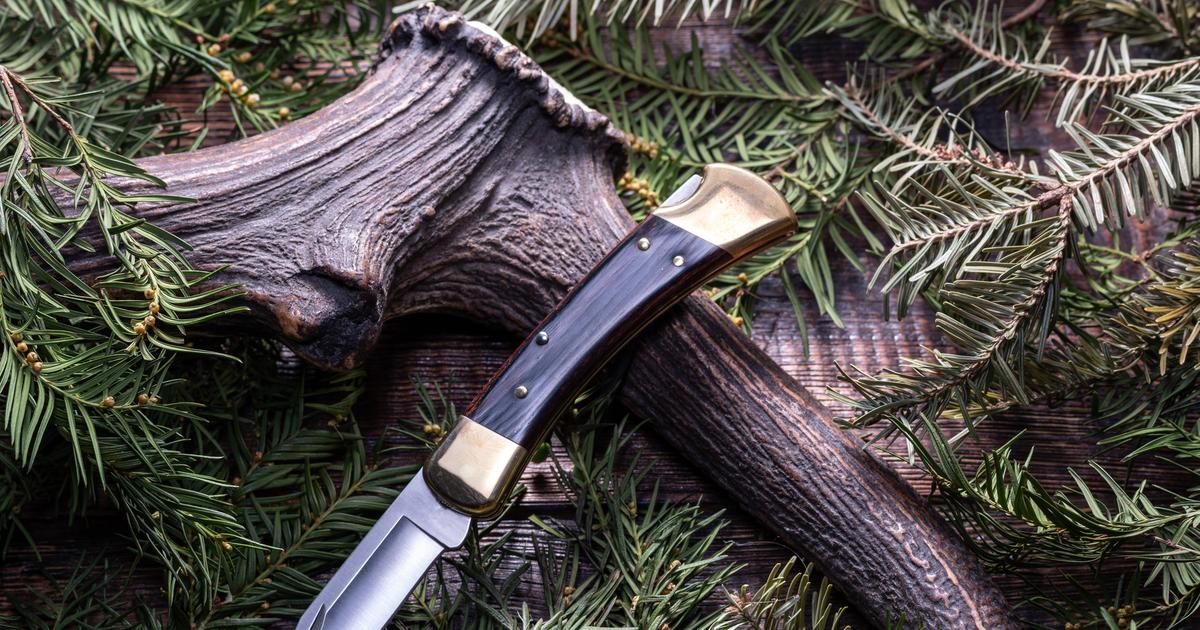 In 1964, the Buck Knives company released their 110 Folding Hunter knife, which changed the knife industry forever. It introduced a revolutionary folding blade that locked in place so tightly that it behaved like a fixed blade sheath knife. New Atlas takes a look at these game-changing outdoor cutlery sets.

The earliest folding knife we ​​know of was discovered in Austria and dates back to the Iron Age around 600 BCE. Since then, many types of folding knives have appeared over the centuries, from simple peasant knives to a range of RV knives, Barlow knives, canoe knives, pen knives, peanut knives, stockman knives, trapper knives and many more. with a bewildering variety of blades for everything from sharpening quills to extracting stones from horses’ hooves.

By the 20th century, folding knives had become so common and affordable that many men felt undressed if they left home without one in their pocket. However, one problem remained: how to lock the knife blade in place once opened.

Folding knives were designed to be easy to open and usually had a spring to hold them in place. Unfortunately, these knives also closed very easily – often on the user’s fingers. Various locking mechanisms were developed, but these tended to be expensive, difficult to use, failed at the worst possible time, and heavy use would damage the mechanism.

Ideally, what a folding knife aspired to was as sturdy and reliable as a sheath knife, which has a fixed blade. Since there are no moving parts, a good sheath knife can be forged from a single piece of steel where the blade and tang (a part of the blade that extends into the handle) are one, the latter being wrapped in wood, leather, antler, bone or other material to form the handle.

Then, in 1964, a new knife hit the market. Produced by the small American firm HH Buck and Son, it was the Buck 110 Folding Hunter knife. Hand-assembled, it boasted a very sturdy ergonomic design that interlocked parts to very fine tolerances to eliminate destructive backlash, it combined new methods of tempering steel with a new locking mechanism.

The result was the first consumer knife that locked the blade in place so firmly that it operated at the same level as a sheath knife, but could be easily folded and stored in a small belt sheath when not in use. was no longer needed. In just a few years, it has become one of the best-selling knives in the world as well as the most copied and pirated.

Would you consider the 110 to be a bit of a game changer yourself?

Yeah, absolutely. In 1963 there were other folding hunting knives that were on the market, but none of them had the strength of a fixed blade. So Al Buck made it his passion to develop a folding knife with a locking mechanism that would give it the stiffness and strength of a fixed blade knife to allow hunters to have a compact tool they could take with them. with them in the field. In 1964, the Buck 110 came out of the gate relatively slowly, then suddenly it picked up traction. This really put Buck knives on the map in the cutlery industry and made us the globally recognized brand that we are today.

The condensed history of it. Hoyt Buck is the founder of cutlery in the Buck family. As an apprentice blacksmith in 1902, he developed a way to heat-treat steel that would create a knife that would hold an edge longer than anything he had found.

Flash forward on the war effort during the Second World War. The US government has appealed to anyone to build weapons for the war effort. Hoyt said “I don’t have knives but I know how to make them”, so he went to buy an anvil. He bought other equipment, built a forge in the basement of the church he ran, and began making knives from files, farrier’s rasps, and hacksaw blades. electricity, then distributed them.

Then Hoyt started not feeling so well and reached out to his oldest son, Al, who was living in San Diego at the time. He eventually convinced Al to learn the knife making trade and it was a good thing he did because in 1949 Hoyt succumbed to stomach cancer and died soon after. Al left San Diego, moved to the Tacoma area and in 1945 Al and his dad founded HH Buck and Son and started putting ads in sports magazines, basically saying send us five bucks and we’ll make you a knife and send it to you. .

During the war, the guys who bought the knives really wanted these new knives because they were very well made. They were around five to ten times more expensive than knives on the market, but with Buck’s lifetime warranty this meant you only had to buy one knife and it was guaranteed for the rest of your life. .

The Folding Hunter when it was released in Catalog 64 really added a bit of traction to the Buck knives and along with other products it just went with us.

Let’s talk a bit about its design. It’s one thing to say, “I’m going to make a folding knife that will lock on and be as good as a sheath knife,” but how did they do it? What was the breakthrough?

These types of designs have a higher failure rate than the Buck 110, which is a rear lock where the rear spring hooks a locking bar that runs the entire spine of the knife.

So basically when it’s open it really locks, almost like a full tang on a fixed blade knife.

It’s sturdy. It’s brass. Thus the liner and the bolsters are integrated, the solid brass then the wood. The former used Macassar ebony until 1994, so now we use West African ebony from sustainable sources.

What about the steel of the blade, I understand there is also something special there.

It’s not so much the steel as the heat treatment of the steel. Think of it almost like cooking. You can have all the same ingredients to bake a cookie, mix everything in exactly the same way, but there is a difference in the cookie outcome if you set the oven to 400°F for eight minutes, or 300°F degrees for 14 minutes. It is the heat treatment of the steel that will really affect the result and the performance of this steel as a knife.

We have to give full credit to Paul Bos. He started working with the Buck family in the 1950s and developed a heat treatment that created high Rockwell hardnesses, which provide much better edge and corrosion resistance.

There are two factors when talking about knife steels. Depending on the use of the tool, it will determine which steel is best suited for that particular tool. If you need a heavy-duty knife that I call a beater – something you’re going to use heavily in woodworking, or as a camp knife or utility knife, you need a softer steel like 5160, which is spring steel. This is the same steel used in the leaf springs of your car’s suspension. It has more flexibility, so it can really take a beating without creating pits, chips or cracks in the steel, but you sacrifice corrosion resistance. If you leave 5160 steel raw it will almost immediately begin to rust.

Going back to the 110 Folding Hunter, three main steels were used. When it came out it was 440C, which was a relatively high carbon steel at the time, but it was pretty standard as far as cutlery goes. There aren’t many fancy ideas for blade steel, but the way it’s been tempered is what sets it apart. So with the Paul Bos heat treatment – I’ll paraphrase this, I can’t reveal any company secrets – it’s super heated to around 2000°F (1093°C) and then it’s instantly frozen in a chamber cryogenic, and then slowly warmed up. Carbides begin to fuse into the steel itself during heating, then cooling, then long tempering. If done correctly it will be a solid piece, if done incorrectly, or too hastily, there will be cracks that can form in the steel. So with heavy use, that’s when you start to get broken blades. You start to get splinters and other blemishes.

Are you using a 110? What is your personal opinion as a knife?

Well, I used the 110. The 110 is very nostalgic to me. My dad was one of seven brothers and they all wore a 110. You weren’t a man unless you had a 110 on your hip. I’m not a hunter, so for me the practical use of a big knife like that just wasn’t really for me. It may be awkward for everyday carry, but for its intended purpose, it is unmatched in the world of cutlery. There’s nothing else like the 110 Folding Hunter.

As a testament to its design, the Buck 110 Folding Hunting Knife is still sold today, so if you want your own piece of knife history, you can get one from Buck Knives for US$59.95.

AI masters language. Should we trust what he says?