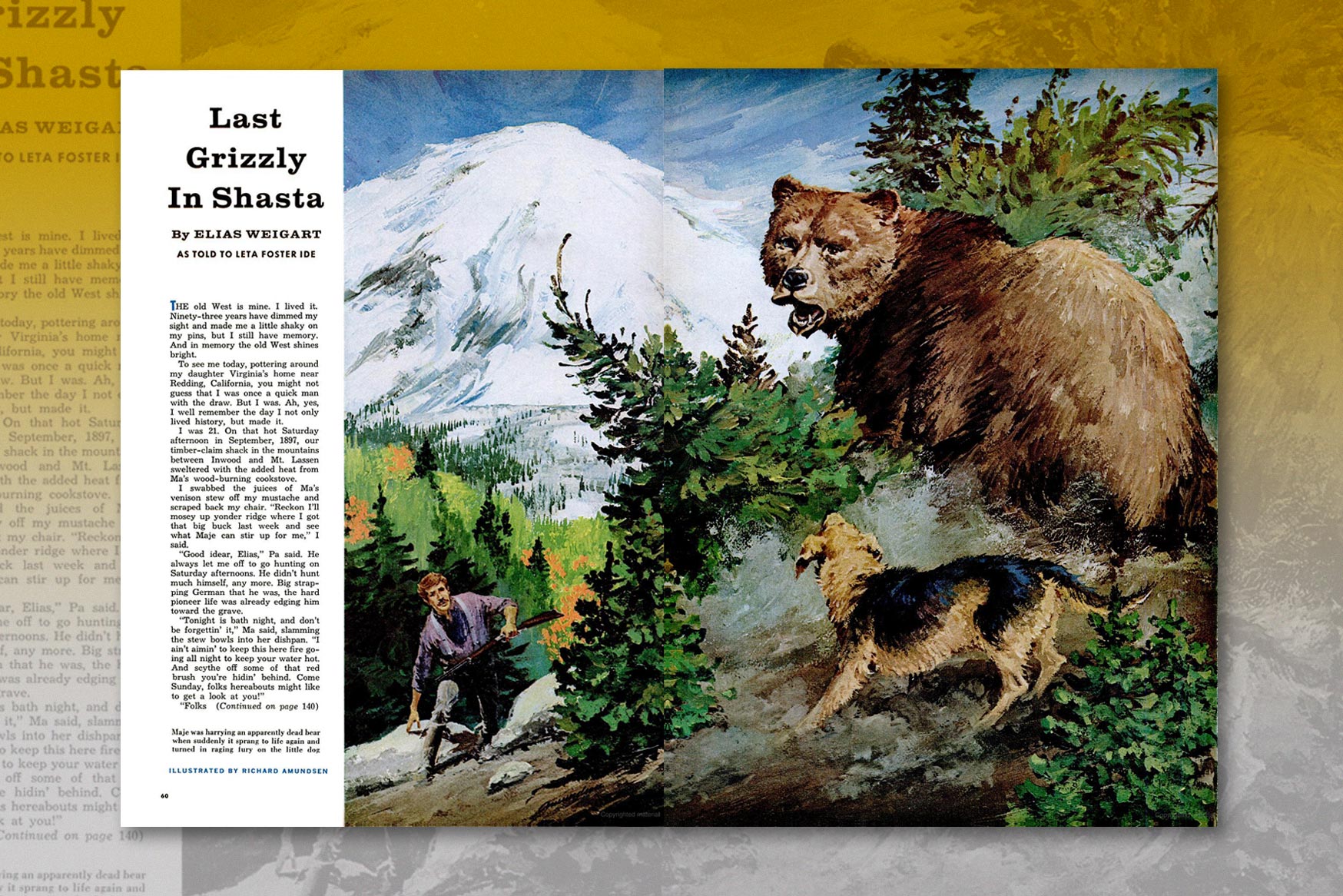 The hunt for one of California’s last grizzly bears

THE OLD WEST is mine. I lived it. Ninety-three years have clouded my sight and made me tremble a little on my pins, but I still have memory. And in memory, the old west shines brightly.

Seeing me today, strolling around my daughter Virginia’s house near Redding, California, you might not guess that I was once a fast man with the draw. But I was. Ah, yes, I well remember the day when I not only lived history, but I made it.

I was 21 years old. On that hot Saturday afternoon in September 1897, our log cabin in the mountains between Inwood and Mt. Lassen suffocated with the added heat from Ma’s wood stove.

I wiped the juice from Ma’s deer stew on my mustache and scraped my chair. “Guess I’ll go over there to the ridge where I won that jackpot last week and see what Maje can get me,” I said.

“Good idea, Elias,” said Papa. He always let me go hunting on Saturday afternoons. He himself no longer hunted much. Tall, burly German that he was, the hard life of a pioneer was already pushing him towards the grave.

“Tonight is bath night, and don’t forget it,” Mom said, tossing the bowls of stew into her pot. “I’m not aiming to keep this fire here all night to keep your water hot. And get some of that red brush you’re hiding behind. Come Sunday, people around might like to see you!”

“People I don’t like that my appearance can look anywhere else! I shouldered my gun and strode toward the door. I didn’t have to call my dog, Maje. He was waiting on the big flat rock that served as our threshold. He knew it was Saturday.

But first, maybe I should tell you something about this part of the country and how we got here.

Ma and Pa had brought us to California from Missouri in 1887, when I was 11 years old. They settled on a dry oak farm near Inwood, in the foothills west of Mount Lassen. Later they also purchased a logging concession about 12 miles further in the highlands.

Life on the frontier was harsh and dangerous. The children were not pampered like now. People taught us to take care of ourselves. Dad taught me how to handle a gun and I shot my first deer when I was 12. The dark has never scared me. I liked to take my dog ​​and my gun and hunt vermin at night. I also learned trapping. With the bounty money and the furs, I bought myself a Winchester .38-55 with reloading track.

This, the way I saw things, made me a man. From the age of 14, I mostly lived alone on the forest concession. I split cedar shingles and fence posts, and shot enough game to feed myself and my family. Sometimes the rest of the family would come over for a few days to bring me store-bought food and to carry the shakes and poles.

Around 1893, grizzly bears arrived in this area and made a lot of noise. A hunter-trapper, named Greasy Baker, killed one. This grizzly weighed 2,100 pounds. [Editor’s note: If this sounds excessive, remember that the California grizzly, now altogether extinct, was a tremendous species. There were a number of authenticated kills of bears weighing 1,600 pounds, and one in Kern County was reported to have been a 2,000-pounder.] The others just disappeared. Some people have admitted that they came from Alaska and went back.

I do not know. Alaska is one hell of a getaway from Shasta County, even for a grizzly bear. Either way, no one saw a grizzly bear skin or track for about three years. Then, in 1896, Jeff Aldridge, a young man about my age who lived on a nearby logging claim, found all that was left of a dead cow. And near the brutally torn remains, he spotted the largest bear tracks he had ever seen.

Jeff brought his horse to my house. I took my horse, my rifle and my dogs, and we returned to the place of slaughter. I had followed a lot of bears, but these pugs made my blood run cold. The front track was 11 inches, the back one 19! This beast was a monster.

Jeff and I slapped our horses home, put our dogs on the scent and followed. All day we trod the mountains, climbing forested slopes, along ridgelines, descending steep canyons and crossing their roaring streams. This bear was surely traveling!

What spoiled us that day were our dogs. Jeff and I both had good dogs, but they didn’t like to share the hunt. As a pack, they were like jealous children. They spent more time killing each other than hunting the bear. At sunset, hungry, tired and disgusted, we gave up the hunt.

The news of this grizzly raised another cry and howl. The people on the roundabout dropped everything to hunt the bear. But like the grizzlies of 1893, this beast simply disappeared. In about a month, people settled down and kind of forgot about the grizzly bears.

Nothing was further from my mind that scorching Saturday afternoon a year later when I left, Winchester on my shoulder and Maje on my heels.

We passed the smokehouse where slices of deer from last week were drying into jerky. We crossed the clearing, climbed the cedar fence and walked through the woods.

It was a day to make you happy to be big and strong and young and alive. Maje and I followed Bear Creek to the fork, then took the North Fork. Ahead, a wooded green ridge of young firs and cedars, blazed here and there with patches of autumn dogwood.

Above all, like a queen on her throne, sat old Lassen. As warm as she was, it was hard to believe that the white cape around her shoulders could be snow. And as peaceful as she was, who would have guessed that the silent old lady was seething inside and that one day she would blow her top off?

That September day was like the mountain – silent, peaceful – with no hint of the searing violence about to erupt.

Maje walked forward, nose to the ground, examining every clump of brush or tangle of berries. He was a yellow dog with a layering of black hair along his spine and hips – half Greasy-Baker-bear-dog, quarter shepherd and quarter bloodhound. I had trained him myself, and once he got his nose into the smell, he never gave up.

Now Maje was diverting birds and critters from a tangle of blackberries near the creek. Suddenly he stiffened. The coarse black hairs along his spine stood up in a spiky pile.

His low, hoarse growl told me he was onto something. “Go get it, Maje!” I said. He sniffed a few circles around the bushes. Then he set off, gasping with excitement, across the basin and back up the steep slope to the ridges. Sunlight rippled yellow tank-like waves along its sides. He crossed the ridge and disappeared into a vegetation of thick young fir trees. I climbed after him, listening, keeping my rifle ready.

Suddenly Maje’s long, moaning bay broke the wooded silence. It was a mournful sound, almost blood-curdling, but ringing with triumph.

I continued to climb. I had almost reached the ridge when something came heavily through the dense young shoots. Not a deer. Even the largest male makes a leaping noise.

Then, directly above me, a large, grizzled, tawny bear leaped from the saplings, saw me, and stopped.

I pulled the trigger. The huge animal reared up on its hind legs, towered over me for a moment, wrapping its front legs like arms around its chest, then lunged down directly at me.

I rushed back, flipping the lever on the Winchester and firing again, and again, and again. From start to finish, the great beast passed so close that I had to keep scrambling to avoid being crushed. Then he was lost to sight in a deep, brushy ravine.

I went after him, slipping and sliding down the steep slope. Maje found it first. When I saw the bear again, half hidden in the brush and rocks, Maje was harassing a seemingly dead bully. Barking and taunting, he rushed nearby, nipped at the large, bulging face, ducked back.

As I approached, the grizzly suddenly lifted its huge head. With a furious roar, he grabbed Maje under his huge grizzled paw and pulled her to his chest. Then he collapsed again. Maje was stuck, a thumping, screaming bundle of terror, trapped between the bear’s head and chest.

I still had two bullets left, but the bear’s head was too entangled with Maje’s frantically flailing head, tail, and paws. I lost my mind. I just dove in and started beating that bear.

Again the bear rallied. With a roar in his throat, he lifted his head and whipped me. Then Maje escaped.

I then shot the bear. When he came down that time, I knew he was here to stay.

Yes, I had my moment in history. But, as Dad used to say, “We age too soon and we age too late.” If I had my life to relive… But what use are regrets?

The old west is dead. He lives only in the memories of a few old pioneers. My eyes may be weak, but I can still see things young people can’t. I can still look back nearly 72 years, straight into the growling jaws of Shasta County’s last grizzly bear.