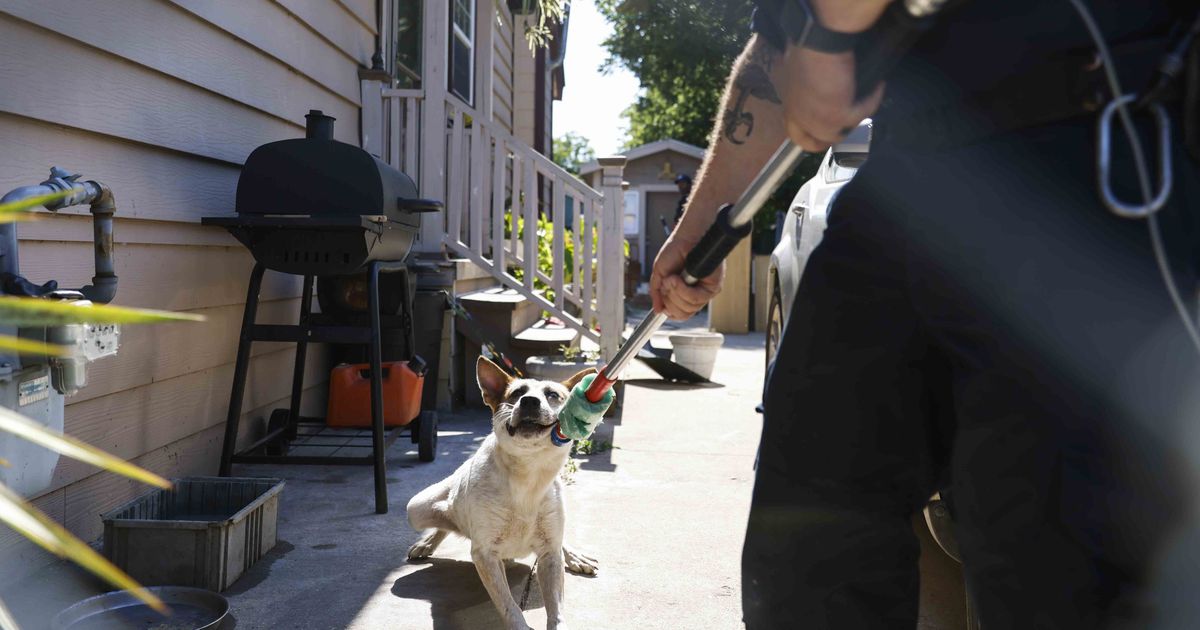 A German Shepherd had been seen with a broken leg sitting under a tree and Reid Koenig, an animal services manager with Dallas Animal Services, was on the phone.

“Sometimes I get there and it’s nothing like I’ve been told,” he said on the way. “I have to ride with it, play by ear.”

Sometimes, when it happens, there is nothing at all.

Stopping on a street near Mountain Creek Lake, he reached the address: No dog in sight. But there was one person.

“I called a week ago!” the person shouted at Koenig as he approached to ask about the dog. The man said the dog had limped days before and pointed to the street.

Anyway, Koenig had to follow the procedure. There was a chance the dog was still nearby. He started sweeping the neighborhood in his vehicle.

He scoured the area, looking at the spaces between the ranch-style houses to see where the dog might run if he had to chase it. He also paid special attention to bushes and any shady places where the dog could shelter from the scorching sun.

After walking a few streets, Koenig stopped and started typing on his keyboard. He filed a report saying the dog was not there – the guy’s fourth such report since he started his shift.

“It’s not ideal to let all these calls go on for so long,” he said. “When you’re actually caught up in everything, it’s like boom, boom, boom.”

According to the city’s response time estimates for injured animal reports, someone should have reached the dog within a day of the call. It had taken six.

Koenig said he couldn’t do much about it – they’re severely understaffed at the moment.

“If we’re five agents short, that’s 50 calls on the shift that we can’t access,” he said.

Dallas Animal Services only has eight agents who can work in the field at this time. On Koenig’s team that day, there would only be three to cover the whole city.

On his way to the site of the next service request, he spoke of the new recruits he trained in the last year, none of whom eventually became officers. His most recent intern decided to take a lower-paying job, both because it was closer to home and for another reason.

Koenig initially accepted this position for one simple reason: he hates sitting behind a desk.

A former paralegal, he knows he has other options that would earn him more, but he’s not interested. He recently took a job with the city attorney’s office for a $20,000 pay raise. Five months later, he quit his job and returned to animal services, where he currently earns around $44,000 a year.

“I don’t think there’s a common reason,” Koenig said of why his other colleagues took the job. One of those colleagues is his wife, whom he met at DAS after leaving another paralegal job in San Antonio.

He encountered more danger than love as an animal services officer.

Random late-night drive-by shootings, animal bites, and the discovery of dead bodies are all slashes he has on his belt as an officer.

One of the first things he does before hitting the field to prepare for potentially dangerous scenarios is don a city-issued body armor. He then attaches protective tools to it, including pepper spray, a bite stick, a truncheon and a tourniquet.

“A lot of that stuff I have myself,” he said. “The government will only release what it says you need to do the job.” These essentials include body armor, catch poles and nets, radios and body cameras.

“They actually gave me the boots, which are pretty good. I just need to get more because they wear out pretty quickly,” he said.

The gear can only go so far to protect him if things go wrong on the job. Calling in reinforcements would be difficult, if not impossible, due to the lack of personnel.

“Three officers, everyone’s on a call, you need help,” he said. “They can’t drop everything and come.”

That day, however, there seemed to be no cause for concern. The four calls Koenig had received so far had resulted in no dog in sight.

Suddenly a call came in about two aggressive dogs, one white and one brown, in someone’s backyard in West Dallas. Koenig radios he’s on it.

Upon arrival, Koenig got out of his truck to be greeted by two people on the front porch. They immediately showed their backyard – one dog was under the patio stairs and another was under their car.

With new officer LaDonte Williams, Koenig began heading for the back with a pole in hand. Arrived on the terrace, he knelt down to take a look.

Cowering under the stairs was an Australian Cattle Dog, white with brown spots and two different colored eyes, one blue and one brown. She didn’t make any noise and didn’t seem too aggressive. But they needed to get her out of there – that’s the job.

After 15 minutes of struggle, Koenig was finally able to hold on to her with his pole. He turned to Williams as he pulled her out from under the stairs, who helped carry her to the vehicle. It wasn’t pretty – she defecated on the way out of fear.

When they went to get the other dog from under the car, he was gone.

“I feel like a lot of people think we hate animals,” he said on the way back to the shelter, “We try to do our best for them…but we have a limited amount of resources.”

One of the hardest parts of the job is that they regularly have to euthanize dogs, he said, which can be emotionally traumatic.

“They call it compassion fatigue, that’s one thing,” he said. “Some people can’t handle that.”

The shelter has euthanized more animals for space in recent months according to public data. In June, 56 dogs were euthanized for space. That’s up from 39 in May and six in April. More than half of them were pit bulls and most of them are euthanized within a month of arriving at the shelter.

Reasons for this include a slow rate of adoptions and a “significant drop” in the number of animal rescuers pulling dogs from the shelter, according to DAS spokesperson Marlo Clingman. The arrival of a few more dogs is another factor, but not a major one.

And there was a recent outbreak of distemper, which forced them to limit the amount of space available. This is something that officers like Koenig should always be aware of when bringing dogs into the shelter.

One of the first things Koenig did with the dog upon returning to the shelter was to give him a dose of DA2PP, the distemper vaccine. After that, he started setting things up to bring her inside.

Koenig asked Williams to roll over a large tub to help transport the dog, who wouldn’t let him move her with just a leash. Williams rolled and tipped it in front of her and helped Koenig lift her into it. They then began to move her to her kennel.

After getting him in, they started going back to their trucks. This work was done, but they were on the afternoon and evening shift. They would leave until midnight.

They both had something unexpected that they could look forward to.

Koenig had just received a text from a colleague saying he was getting a pay rise, which was later confirmed by his superiors.

“That’s something, maybe it will help.”