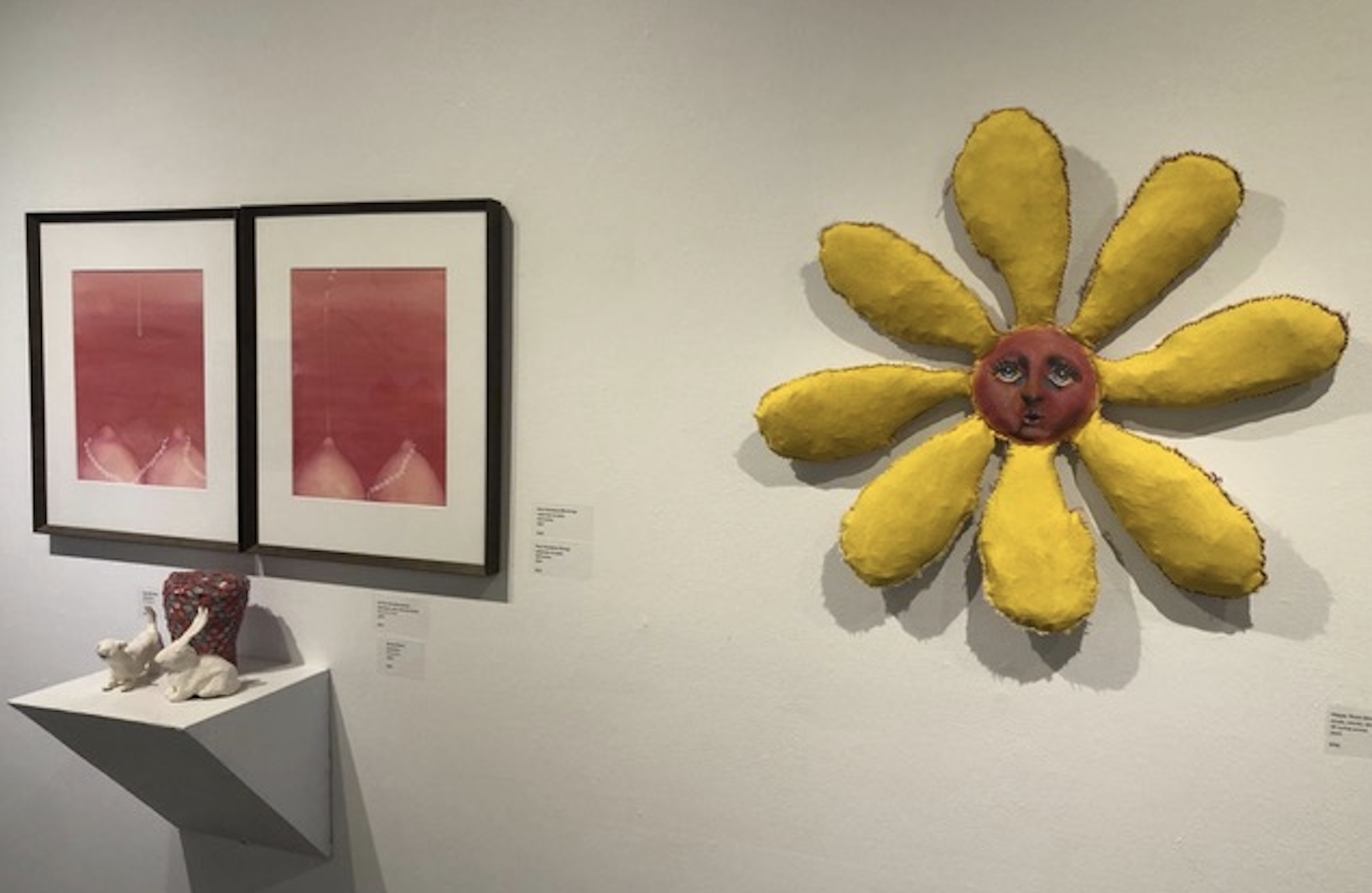 Redux Contemporary Art Center presents Shelby Corso’s first solo exhibition, on view through May 21. Still more beyond thought — is the sky I gazed upon as a child. With love, from Earth is comprised of paintings, drawings and sculptures, which are thoughtfully grouped to depict the experience of being an inhabitant and witness to life on planet Earth. The show was hosted by Julia Harmon.

Corso often draws images from nature, stories, found objects, dreams and imagination, working somewhere between abstract and representational. The artist works to synthesize visual and emotional information, usually working on a smaller scale to create a more intimate experience between the viewer and the work.

Shelby Corso earned her BFA in Painting in May 2020 from the Maryland Institute College of Art (MICA) in Baltimore, Maryland, and now lives and works in Charleston, currently working as a studio artist at Redux. Corso said she’s grateful to Redux for sharing her work with the public and calls the experience “incredibly rewarding.”

The first picture of the exhibition, Like anything, everything, depicts a windswept dream field, which Corso describes as having been painted from the perspective of an insect. This painting was the initial inspiration for the show, Corso said.

“I’m finished Like anything, everything, and i was overwhelmed with a feeling of happiness and a strange, sweet sadness thinking about insects…the painting reminds us that when we look at the sunset and think about our lives or our existence…the little slugs in your garden do the same.

The show is inspired by the artists’ everyday life experiences, including their personal rituals and musings on existence – much of which can be gleaned from its thoughtful and poetic titles. The title of the exhibition is a kind of poem about “that which is beyond description”, explained Corso.

“Simply put, it’s about being a little creature on earth and keeping that sense of wonder…the world is built for you (and therefore everything), and how precious that is.”

“The original incentive that I gave myself by hosting this show was to try to collect information that I would show an alien on Earth, and that kind of evolved to include the idea of ​​growing up and observing how my relationship with nature has changed and how in some ways it has remained consistent.

The exhibit is in Redux’s 1056 gallery, which is essentially a hallway space. Corso doesn’t mind – she loves how the works have a two-way conversation. Holding the exhibition with Julia Harmon in a hallway space, the artist explained that the unique space limitations were inspirational.

“A hallway is a fairly untraditional space to have a gallery, so there are some things you can’t take for granted,” Corso said. “The work is going to face each other in close proximity, and the space is going to be able to accommodate fewer people at a time… It was an interesting limitation, though, as it allowed all the work to interact back and forth. instead of hanging next to each other.

This is particularly evident in two works that mirror each other: The largest painting in the exhibition, Epiphany is located right in front of the sculptural work Good tears (dew drops). Corso uses humor to invite the viewer into these works in a playful and tender way. The title Good tears (dewdrops), she says, comes from the idea of ​​dew drops like the tears of a crying flower.

Epiphany, explained Corso, has a double meaning. “An epiphany is both a sudden and mythological realization, when an old spirit comes to give you information.”

Either way, she says, an epiphany is a manifestation of something divine.

“The center of the room is a ghost in the shape of a Tears of joy. So when we look Epiphany back to Tears of joy, we see through his eyes (and therefore, the eyes of nature). When we look Tears of joy back to Epiphany, we take the sight of the ghost, and we can see a person’s face in the flower… It’s a metaphor — what is looked at, looks back. It is further meant to remind us that we must not only see ourselves metaphorically in living beings, but realize that we are these things, literally.

Corso used the form of the sculptural work to create the painting, creating the “ghost” it refers to. It is not by chance.

The ritual, and its proof, is an important element of Corso’s work. This is particularly evident in his sculpture, “Urn for Deceased Plants”, a beautiful vase containing dead flowers.

“I think the idea of ​​throwing the dead plants away, chasing the goldfish, and running around until there’s just a speck on the ground is…really unsettling,” Corso said. “I wanted to make a resting place for my plants when they die, out of respect for them and the important bond we have with them. I’m interested in cycles and passages…and rituals are events that facilitate transformation or the movement between states of being, so I like to refer to these rituals, whether they are official and public, or personal that are not shared with anyone.

Returning to the studio day after day, trying to create objects that contain some kind of meaning, making art is, for Corso, a ritual act in itself.

Corso likes the idea of ​​paintings as objects”, highlighted by recurring references to materiality. The artist deliberately allows the grain of the wood to shine through smooth oil paint on some works. Other paintings continue on the sides of the canvases which are made with love and ritual by the hands of Corso. Sculptural works point to process: for example, his soft sculptures, Primordial Self, were sewn by hand. The tactile nature of these works reveals a ritual, but also a personal story. Sewing is a skill passed down from Corso’s mother.

“The process of doing it by hand is labor intensive and can be tricky – it’s also very repetitive,” she said. Specifically in soft sculptures, there is a ritual element in the making of the work.

“These pieces feel like they’re alive to me once they’re done, almost as if the manufacturing process was their birth.”

“I was riding my bike to see an artist speak, and just as I was riding towards the building, I knocked over a little bird that was lying on its back on the sidewalk. It made a little squealing noise and I am almost certain to have killed him, which was very upsetting to me, so I picked it up and put it in my coat pocket… Later that night I went to a park and buried it with a big southern rose flower. After this whole incident, I was thinking about death and how being in a grave was like being sent back to the womb, like you were only being prepared for your next state of being, and I thought that was wonderful. This also ended up causing a second drawing called, good omenswhich depicts a bird flying again with symbols of life and good luck.

In the exhibition, Corso combines sculptures and paintings in a way that is both playful and symbolic.

“For example, drawing, Thinking of youwas paired with my three Primordial Self,” she says. “These works are about the idea of ​​feeling your feelings in your body, as opposed to intellectualizing them,” – These works were done a few months apart with many paintings between them, but when I saw them all together, I felt good… The ceramic works were paired with the Pearl necklace diptych. The paintings speak of cycles and transformations – the idea of ​​a body serving many purposes, such as the breasts being able to both nourish a child and be a source of pleasure, and that these things exist at the same time is not not immoral, nor should it be taboo.”

Corso explores this idea of ​​conflicting truths with his painting To you and back to me, a female nude with a limited color palette. Two small rabbits look suggestively under the subject’s legs. The nude subject of the painting confronts the viewer with an ambiguous expression on their face, as if unsure whether or not you can be trusted.

Corso constantly subverts popular associations of symbols and imbues these patterns with new meaning. In To you and back to me, this subverted symbol is a rabbit. The motif is repeated throughout the exhibition, the work in the small hall conversing happily with To you and back to me, like a sculpture of a white rabbit hopping on a pair of breasts.

“Dogs and rabbits tend to have a lot of different associations, and I see them as these creatures that are both innocent, yet totally wild and sexual in some way,” Corso said. “These pieces work well together because they show that two seemingly contradictory truths can exist in one being.”

What does she hope viewers take away from her show?

“I hope people remember what it was like to see things when they were kids,” she said. “I hope the work makes them feel something a little deeper, and gives them a renewed sense of the importance of nature, and I hope it makes them realize that they are nature… I hope this leads them to wonder if flowers and trees are watching and listening.

Winner of the 2021 State Journalism Top Honors (Best Editorial and Best Cartoon), the Charleston City Paper brings you the best of Charleston every day. Support our fearless journalism with a one-time donation or become a member of the City Paper Club.