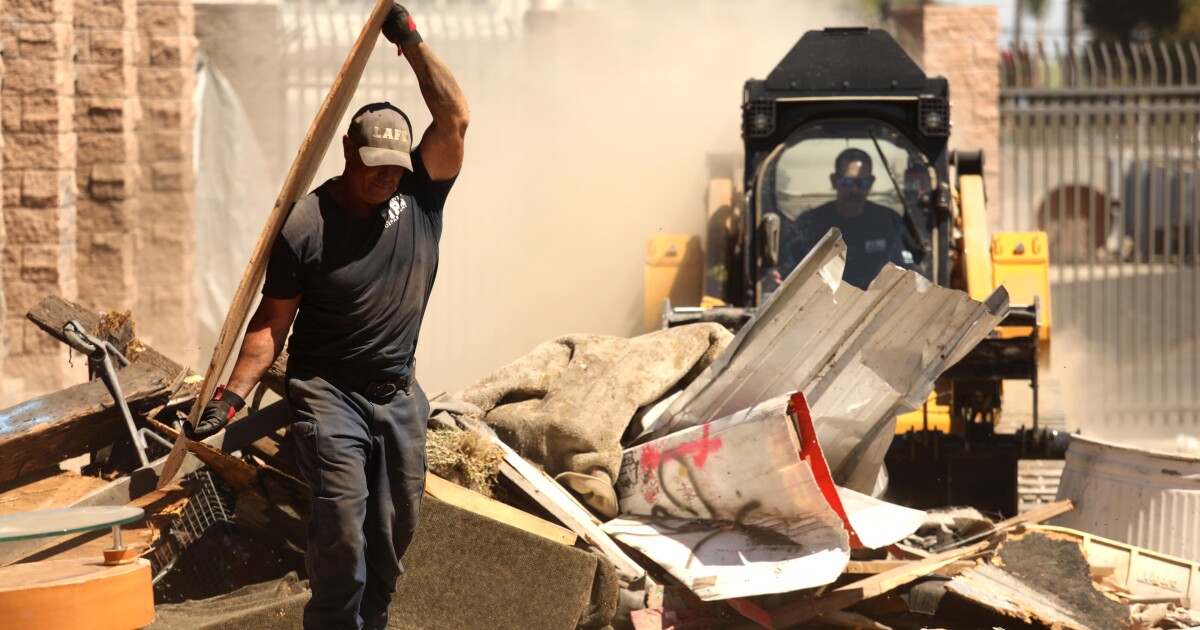 The man who lived in the manhole was gone.

After weeks of visits by outreach workers and last-minute persuasion by the police, the row of shacks was abandoned.

At 8 a.m., a bulldozer and grader circled the 10-acre vacant lot in Watts, scraping up the 3-foot-tall weeds and trash they hid in heaps. A smaller tractor sifted through clothing, television and computer parts, infant car seats and broken concrete. A fourth machine with a shovel lifted the concentrate, along with several loads of discarded tires, into three giant bins.

Thursday’s cleanup of the town’s troubled Lanzit property was a huge boon for an oppressed neighborhood, said community activist Germán Magaña, who acts as an unofficial spokesperson for nearby business owners, residents and even people who lived on the land.

But that was just the start of a new phase that will require vigilance to prevent the property from falling back to shreds. It will take dynamism and creativity to overcome the 28 years of failure that marked the city’s development plans.

“As of today, I’m very happy,” said Magaña. “I know it will take some time to find a real solution to what is going to be done with the property. It’s a process, and we all understand that. But for now, the community, as well as the homeless community, is better off for it. Many have gone into housing.

The city bought the land, just south of 108th Street and a few blocks east of Avalon Boulevard, in 1994 in hopes of revitalizing a community bled from its economic base and traumatized by the 1992 riots. The plan was to bring hundreds of high-tech jobs to Watts with the first industrial development in the area since the 1970s.

As chronicled in a Times article featuring Juan Luis Gonzalez-Castillo, the man in the manhole, at least five development proposals have died in a decades-long saga of mayoral intrigue, bureaucratic delays and even bad luck as a developer died shortly after development. project was accepted.

Magaña credited the article with precipitating the city’s response Thursday to the long-running condition on the ground.

“Maybe often the will isn’t there,” he said. Or, in broad reference to the many city agencies that had let problems escalate: “Sometimes we’re not aware of what’s going on in our neighborhoods.

“It makes a huge difference when members of the community, the fire department, the police and the councilman’s office work together to make this happen,” Magaña said.

The multi-agency project began with earth-moving machinery trucked in by the Los Angeles Fire Department.

They walked around the property for hours, cutting the weeds.

Meanwhile, a team of welders from the city’s General Service Department carried out further repairs to the oft-broken fence at the 109th Place dead end, the entry point for thieves disposing of stripped car bodies .

Three outreach workers from the Homeless Outreach Program Integrated Care System, or HOPICS, South Los Angeles’ main homeless-serving agency, examined each of the makeshift homes to make sure they were abandoned. They said they had found places for anyone who wanted them.

Unfortunately, Gonzalez-Castillo was not among them. They had found him a place to live, and he agreed but later changed his mind, they said. They didn’t know where he was.

Los Angeles City Councilman Marqueece Harris-Dawson arrived in the early afternoon to observe the final stages of the cleanup under a canopy erected by his staff on the road in the center of the lot.

As the brush turned to bare earth, two dogs, either stray in the neighborhood or abandoned by homeless people, began to nervously pace the grounds. Officer S. Infante of the Los Angeles Animal Services showed up to try to capture them. He approached a black Chihuahua and nearly held it in his hand as he ran away. Infante walked away empty-handed as the Chihuahua repeatedly slipped away from him and the larger dog disappeared.

Mike Balderrama, manager of Cardinal Glass Industries adjacent to the Lanzit lot, watched through a metal fence. From time to time, he looked at his feet where he pushed a few used syringes with his boot.

“That’s where they would sell their medicine,” Balderrama said of the residents of the now vacant shacks.

Balderrama said he welcomed the removal of the immediate threat of a bushfire spreading to the roof of the Cardinal building. But he feared the conditions outside the pitch would return inside.

Compton Creek, a concrete canal bordering the Cardinal properties to the north, was a wasteland of cardboard signs, dirty clothes, a used butane canister and other assorted trash. A few steps down the canal bank, a stolen van had been abandoned and another slum encampment remained, tapping into a power line to run an air conditioner.

At one point, LAPD Senior Senior Officer Armando Leyva, one of several police officers overseeing the cleanup, drove down the canal access road to call a tow truck to retrieve the van. Then he continued to the encampment where he informed two men that they had to leave, although he gave them no time limit.

Harris-Dawson said he thinks community activity is the answer.

“Ensuring a space is used regularly by individuals and families is the best and most enduring security,” he said in a statement. “

He said he would work with neighborhood and city departments to determine what kind of activities are desired and feasible.

In the long term, he said, he remains committed to “creating the job-rich utilization, hopefully with manufacturing, that it once was.”

Thursday’s cleanup continued through the afternoon as Capt. Richard Diede of the LAFD Heavy Equipment Unit entered the last two remaining shacks to ensure they were vacant.

He passed a fan hanging from the ceiling and electrical wiring in the ground connected to a nearby telephone pole. After getting out, he gave the go ahead and the bulldozer got to work on the first structure. Another machine joined soon after, bringing down the second structure.

The job was still not done when the crews left for the day.

The fire department returned on Friday to place several concrete freeway barriers in strategic locations to prevent anyone from illegally entering.

Magaña said he knows many of them are decent people whose lives could be changed by good jobs. But he added that there are others who are predatory, controlling the camps out of fear and stealing from nearby businesses.

“What I hope for political offices is that they can finally create a separation between the homeless and the criminal aspect,” he said. “It will be something beneficial for the community.”

Time to work on the deer stands