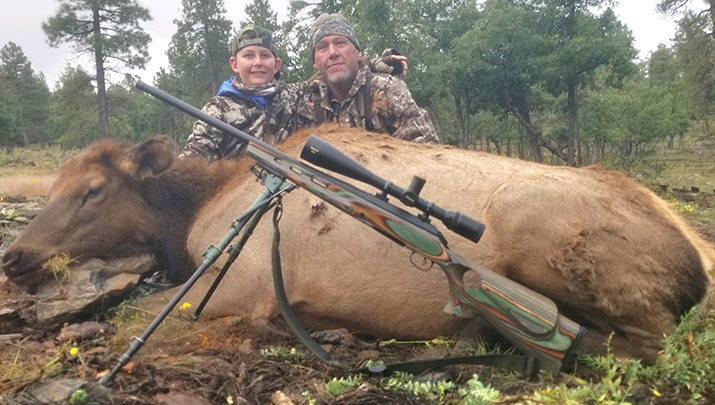 Hunting in America with your children and grandchildren has been passed down through families for hundreds of years. It is an age-old tradition that is loved and practiced by millions of people every year.

I am proud to say that I am a hunter, sportsman and conservationist who believes that hunting is something we should be proud of as a group, and not be ashamed to say publicly that we are hunters.

Over the years, I took the opportunity to pass on the hunting tradition to my two sons. And while one son didn’t embrace the hunt, the other, Jimmy Darryl, did.

And as a grandfather to Jimmy’s sons, Logan and Jace, I had the good fortune to share hunting experiences with both of them. A few years ago I drew a coveted mule deer tag from the Arizona Band (Unit 13B).

I gave it up to Logan who took a 32 inch dandy dollar on this hunt.

Last year Jace, who was 12 at the time, drew an antlerless elk tag in Unit 10. Under the watchful eye of my friend Jay Chan, who has been on almost every hunt along with Jimmy and Logan, Jace was able to take a young elk on his first big game hunt in Arizona.

This year, Jace got lucky again when he drew an antlerless elk tag for the youngsters in Unit 6A.

Jace lives in Edmond, Oklahoma with his parents Jimmy and Shannon and is an athlete and a good student.

School is important to him and the school does not recognize family hunting as an approved “excused absence”. With that in mind, Jace and Jimmy’s time here was going to be limited. Jimmy thought they could hunt for three or four days at most. Fortunately, the hunt for Jace this year began on Friday.

Dating Jimmy and Jace was Jimmy’s best friend and versatile good guy Jason Richmond. Jimmy and Jason have been friends since they were kids.

My good friend Marc Schwartzkopf was also going to come and help. Marc is a firm believer in helping children and vets, and goes on many of the hunting trips I do.

I hadn’t hunted in the northern part of the unit, but my good friend Ryan Chan, who lives in Flagstaff, is there all the time and was kind enough to give me a few places to go.

In the end, his knowledge and help would be invaluable.

I went to the unit a few days before the hunt started just to look around and familiarize myself with this northern area.

The day before the hunt started, I walked up to the truck at dawn, and there, 500 yards away in a meadow, stood 10 elk, nine cows and calves, and a single bull.

“Hmm,” I thought, “this is going to be an easy hunt.” I thought we could take Jace for a walk out of camp the next day and do it. Unfortunately, this area is completely public and that evening a group of outdoor enthusiasts set up five caravans in this meadow.

Jimmy, Jace, and Jason arrived on Thursday, and that evening Jace and I went on a drive to visit areas not too far from where we were camping.

A light rain was falling and shortly after telling Jace to look across a long ridge, he said, “Grandpa, there are elk!”

Of course, through the canyon there were plenty of elk, 50 to be exact. In this giant herd were four mature bulls and many cows/calves.

We stopped and started watching the herd. Bulls cried one after another, while cows and calves fed peacefully on the hillside. At one point a big cow was standing next to us, only 99 meters away from us!

Despite several other vehicles passing by and seeing the elk, I knew where I wanted us all to be on opening day.

I didn’t get much sleep that night and I bet Jace didn’t either, just thinking about the day ahead.

The plan called for us to get up in the pre-dawn darkness and listen to the elk. Elk are very noisy during the rut, and bulls and cows make a lot of noise.

The guys were all smiles as they heard bulls howling all around us in the dark.

As day began to dawn, Marc, Jimmy, and Jace headed for the nearby mountain while Jason and I waited and listened.

When it was daylight, we heard a few shots, but none came from Jace. Jason saw the huge herd moving across the mountain a few hundred yards away. The problem was that Marc, Jimmy and Jace were far away. They eventually came within 275 yards of the herd, but Jace never got a chance to fire.

Jason and I also saw other moose which apparently spooked the mountain.

Later we heard several more shots and found two young hunters with a yearling that one of the boys had had. It was his first elk!

Later that day Jason, Jace and I did what I called a “grandpa hike” in an area behind the camp. We didn’t see any elk, but for me being able to hang out with them made all the work I did on the treadmill at the gym worthwhile.

The second day started by returning to where we had seen the last two groups of moose the night before.

Marc, Jimmy and Jace headed out in the pre-dawn darkness while Jason and I looked out over a large meadow then picked up the guys at a designated spot.

Just before the boys arrived at the pick-up site, a bull answered one of my calls. As the guys walked towards the bull, a truck drove by and the bull fell silent.

That afternoon, I received a message from a guide I had never met who resides in Flagstaff. Hunter Reems had succeeded in his hunt on opening day and he wanted to give me some information.

We went to the area he suggested, and Marc, Jason, and Jace headed out to some canyons.

It was Jace who first spotted an elk coming down a hill far away. Hunters determined there were 10 elk in the group, along with several bulls, several adult cows and about 5 calves.

Lady Luck smiled as the elk raced up a canyon and stopped in an open area 165 yards away. Jason prepped Jace for the standing sideways shot, but when he pulled the trigger, all they heard was a loud click!

The elk were seemingly indifferent as Jace chained another round in the American Ruger rifle which was chambered for 6.5 Creedmoor.

The herd actually stopped just 99 yards from Jace, but they were huddled together and he couldn’t shoot safely and ethically, so the elk walked away unscathed.

Later that night I found out what had happened. In the excitement of loading a round and being unfamiliar with the rifle, Jace hadn’t put the rifle bolt fully closed, and so had a misfire.

Jace was shaken and upset, but we all reassured him that he would get another chance, and that was part of the hunting experience.

That night I got a call from Ryan Chan. He said he heard and saw elk near the camp during a reconnaissance.

He said he and his dad Jay would meet us at camp at 5 a.m. Sunday.

Sure enough, at 5 a.m., Ryan and Jay were at camp. Ryan had heard the cries of bulls in the dark on a ridge near camp before.

A plan was made where Jace and Jimmy would go with Ryan and Jay, while Jason, Marc and I would go around the mountain on the other side to watch and wait.

As the night gave way to a new day, Marc heard a bull howling nearby. We saw several moose coming up the mountain towards where the guys were heading.

We got a message from Jimmy saying they found a large herd of elk and Jace was getting ready for a shot.

So we waited and waited and waited. At 6:45 a.m., we heard a gunshot echo from the mountain! A few minutes later, I received a text from Jimmy stating what we were all hoping to hear! “We have a cow down,” he said.

It took us almost 45 minutes to get to where Jace, Jimmy, Jay and Ryan were.

Ryan said they had been on the elk for over an hour and nearly shot two more cows, but they didn’t come up with a shot Jace was comfortable with, so they waited.

At the time of the shot, the cow had traveled only a few meters before falling and expiring. Jace made a perfect shot!

Jay and Ryan offered to dress the cow in the field and they allowed Jace to participate in the process.

In the end, we processed the elk at my home in Kingman.

It was also hard to see them leave; we all shared a few tears, but hopefully there will be another chance or two to hunt with them in the future.

Many thanks to Jason, Marc, Ryan and Jay for their help in this hunt.

And we were especially grateful to Hunter Reems for their help.

It was just another great example of hunters helping hunters, and it’s something we should all be doing.

San Tan Valley family lose everything when their house burns down