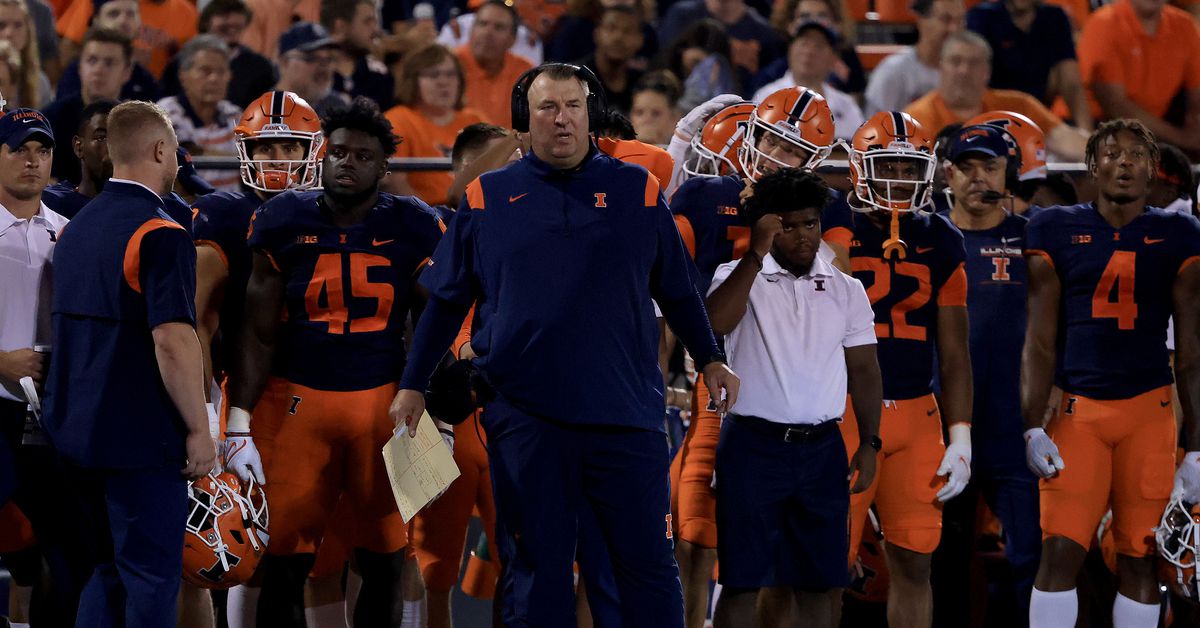 Understand this: Wisconsin (-11) vs. Illinois (2:30 p.m., BTN, 890-AM) is nothing more than two college football teams competing there on a fall Saturday.

It’s certainly not about Illini coach Bret Bielema taking on the Badgers, whom he coached from 2006 to 2012.

At least, that’s what Bielema wants us all to believe.

â€œThis game is about University of Illinois football versus University of Wisconsin football,â€ he said this week, â€œand that’s what it’s about, that’s what was motivated My preparation for any game is exactly the same.

Maybe on the preparation part, but come on. Outside of the 1-3 Badgers and 2-4 Illini bubbles, this game is interesting for one simple reason: Bielema, who coached three straight Wisconsin teams at the Rose Bowls before leaving for Arkansas, is back on the field with the Red and White.

This time he will go against them. He will also go against his former offensive coordinator. Paul Chryst entered the season with a very well ranked team, but his offense is in freefall and the pressure is on him like never before. Badgers quarterback Graham Mertz is questionable with a chest injury. His play has been unquestionably shoddy since he lit up the Illini for five touchdown passes – with just one incomplete – in the 2020 opener.

If Mertz doesn’t go, it will be Chase Wolf. It hardly matters. The Badgers’ running game is a shell of itself, and the offensive line isn’t giving anyone time in their pocket. Without an elite defensive front, this team would have nothing to hang on to.

Illinois have to lead the ball with Chase Brown and all hands on deck anyway, as their veteran line has been underestimated and quarterback Brandon Peters has done nothing to rise above it. of her. It’s hard to imagine a scenario in which Bielema clinches his 100th career victory unless the Badgers roughly hand it to him.

The winner has some semblance of hope for the bowl. The loser has no hope. Is it worth mentioning that Illinois beat the Badgers the last time they were in town? It was Lovie Smith’s best win in five forgettable seasons at Champaign.

Northern Illinois (+ 12Â½) to Toledo (11 a.m., CBSSN, 560-AM): Remember the early 2010s when the Huskies had that MAC West rivalry? The times have changed. The Rockets also have plenty of ways to score and play in defense. They win by 17.

No. 13 Arkansas (+ 5Â½) to No. 17 Mississippi (11 a.m., ESPN): We learned last weekend that none of the teams – the Hogs, who were outscored in Georgia, or the Rebels, who were managed by Alabama – are a threat to the SEC title. Didn’t we somehow already know that? We were doing. Ole Miss has more resistance, however, and wins by 10.

No. 14 Notre Dame (choose them) at Virginia Tech (6:30 p.m., ACC, 780-AM): The Irish were exposed last weekend as a non-playoff contender. The Hokies aren’t one either, but they still scare Blacksburg. Hard – Hokies in overtime.

My favorite favorite: No.9 Michigan (-3) in Nebraska (6.30pm, Ch. 7): The Huskers are strong enough, but they cannot compete with the horses of the Wolverines. Wait, isn’t that a terribly mixed up metaphor? Horses by 10. Neigh.

My favorite outsider: Texas A&M (+18) vs. No.1 Alabama (7pm, Ch. 2): It’s a bet on Aggies coach Jimbo Fisher. It was supposed to be a top-five game, but Fisher’s QB play was disastrous. But his defense? This is hands down the best Tide has faced. Close game won by Alabama, of course.