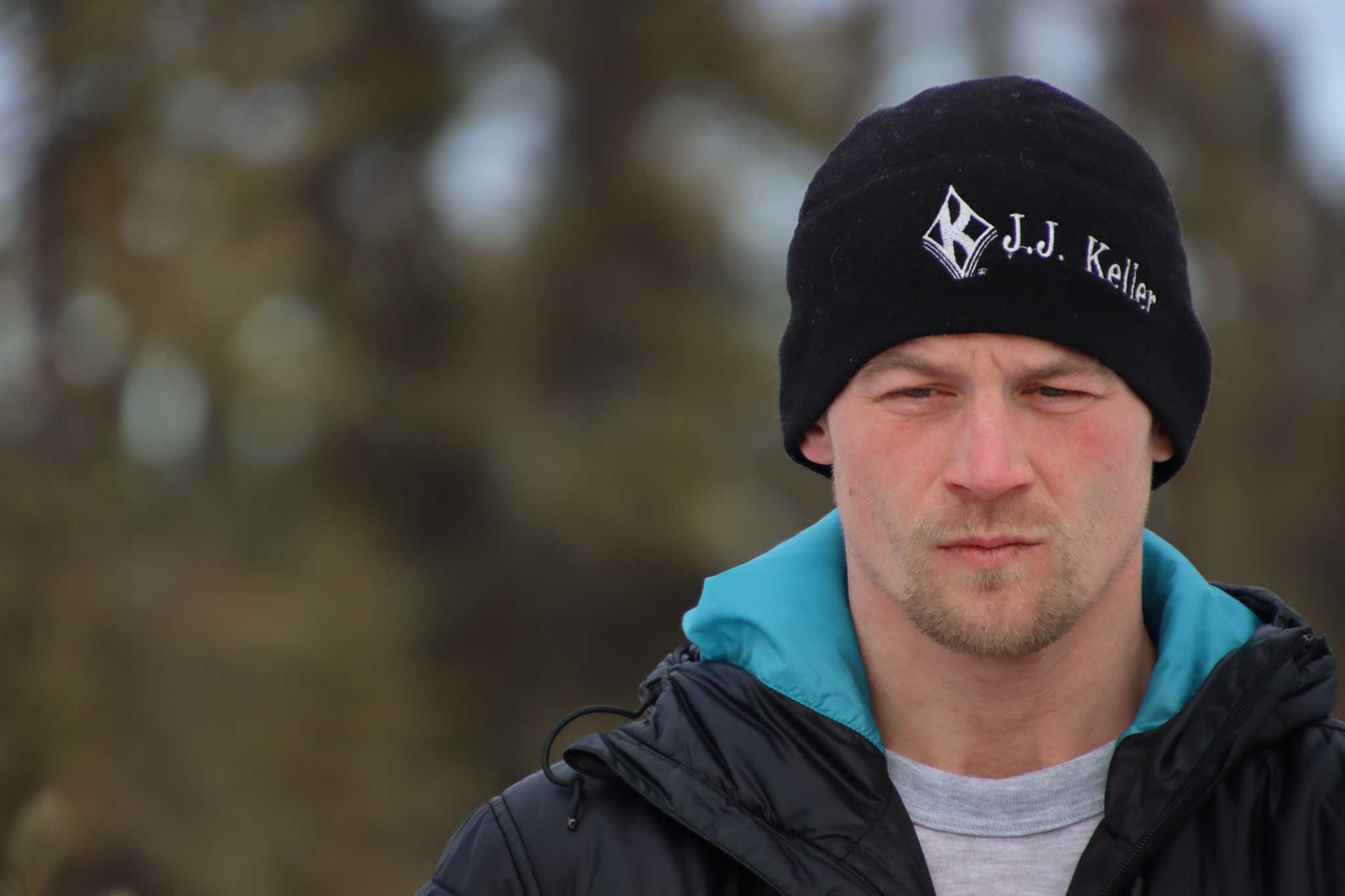 UNALAKLEET — Five-time Iditarod champion Dallas Seavey raced to the checkpoint here in second place early Sunday, about two-thirds of the way through the 1,000-mile race.

Seavey chose to stay for about three hours. After feeding his dogs and putting some straw on them to curl up in, he spoke with Alaska Public Media reporter Lex Treinen and Anchorage Daily News reporter Marc Lester.

Here’s what Seavey had to say about the trail accidents, his dogs and whether he thinks he can catch up with Sass.

The following transcript has been lightly edited for clarity.

Dallas Seavey: I like how it sets me up for the rest of the coast.

Anchorage Daily News: Tell me why. What does it do for you?

DS: It’s trade secrets. [laughter] No, it’s, we see a lot of big pushes going on, especially at the end of the race. But they are not always well thought out. You see, people are trying hard and it puts them forward, but forward at the wrong time. There’s only one place you really need to be up front. I think we saw that last year, people trying to catch me. They approached, but it was not at the right time. So you have to have a good time off. And that prepares me for a very good holiday. And I think the best schedule for the coast for my team.

Alaska Public Media: You mean like with the daylight and the heat of the day, that sort of thing?

DS: Not that much. But where you want to have your big pushes or your longer runs, how do you split the run. I mean, I could do a 100 mile run. But we have to understand that if we do that you either have to take a really long break afterwards or be at the finish line. So it’s more about where you want your dogs to be set up for their longer rests, their breaks – how strong is your team? If you have a team that doesn’t have a high top speed, but has a lot of energy, you’ll want to spread the runs evenly. With shorter breaks, you know, spread them out, don’t do one big move, lots of little moves, lots of chances to adjust a lot. So chances to correct and accommodate the track. So it’s tactical mushing and I think that’s what I do well on the coast. So that’s where I want to be.

AKPM: Do you communicate with someone to strategize? Do you know where Brent is? And how much do you pay attention to that?

DS: That’s how well I know: I stopped at the old woman’s hut (a trailside hut outside Unalakleet) just to see if there was any straw there- low. And there was straw there, which told me he was camping there. But that’s only a hair’s breadth away. But I got into it. It’s sort of my information. I have my cell phone, but it’s AT&T, which doesn’t work anywhere. So I had service for three minutes when I passed through Galena but didn’t stop at Galena. So no, I didn’t get much for Intel. But there was a snowmobile or at Old Woman’s that said Brent left at 7:30 p.m.

DNA: Any temptation to try and close the gap sooner than you possibly should?

DS: I think there are some. But I think that’s what I was talking about earlier. We feel this urge to catch up. So we look at the schedule, we look at the next 24 hours and we’re like, ‘Oh, I can do this crazy thing to catch up. Very big. You caught up. But what do you care? You are at the wrong time, you still have 200 miles to go. And now you have a team of slow dogs.

So White Mountain is not the finish. (The checkpoint 77 miles from the finish line.) The finish is the finish. Another common mistake is that people feel like they have to catch up. I would rather be at White Mountain and still be 20 or 30 minutes behind but have a stronger team. So we balance a number of factors. One is to close the gap. But the other is to make sure that if and when we catch up, we have the strongest team. Because catching up only means that you are now in a running race. So are you ready for this run? It’s a big question.

AKPM: In Cripple, you told me that the pressure this year is not to win for fun. How does it hold? Do you feel more competitive now?

DS: I have always been competitive. I mean, obviously, we’ve done well in that area in the past, I think. But this year we had more than a few curve balls. And I will always have fun. It’s before all. But part of me that’s having fun is that I like to be competitive. And I think I also told you in Cripple that I want to compete, I like to compete and if I can compete for first place, great. But I want to have a team that I can race with regardless of position. If I’m racing for fifth place, I want to catch the guy in front of me so I don’t get run over by everyone behind me. So I’m having fun.

I feel like Murphy’s Law (“everything that can go wrong will go wrong”) is like a lost little puppy that follows me around. It’s a bit boring. But other than that, we’re having fun and it’s going remarkably well.

DNA: Tell me about the leaders you came with.

DS: Stupid and even dumber. [laughter] White is Pecos. It’s actually one of the big surprises. Well no surprises, but the most improved – let’s call it that. He finished with me last year, but he was a leader who did well at the start of the race – he would do well in the team – but was not a leader at the end of the race. And on this front here, he’s really taken on a new gear. And not only was the leader driving hard, doing well, and in doing so, giving my two main leaders a break. But he was also trotting. He didn’t overwork himself to do it. He was able to settle into his normal rhythm and lead. So I was really excited to see that – multiple levels of maturity that he’s developed over the last two races.

It’s still terrible to find the track though [laughter]. Coming here, he was just everywhere. He just watches the birds in the sky and runs right to the end of the trail. I’m like, ‘Man, be careful!’ The other is Titan and he is only three years old. In fact, the swing dog is his father. The other swing dog is his uncle. And those are my two main leaders, Prophet and North, and both of them were with me last year. And this is Titan’s first time. Prophet has a few kids on this team.

DNA: Of the four Iditarods you’ve won that have come through Unalakleet, how many times have you been in the lead at Unalakleet?

DS: I have no idea what seems like a good job for a journalist. [laughter]

DNA: I was just wondering if this was a new situation?

DS: No, I don’t think I’ve ever received the Gold Coast Award. I don’t think I was the first in Unalakleet. Looks like I should have at some point. But like in 2015, I won by three hours. And I know I wasn’t the first here. But I have two different ways of running the coast and with this team, this pace and where everything broke out, you know, with illness and everything – where we came from, say in Cripple – makes sense to us. So I am executing this plan. This playbook.

DS: There were a number. One of my good dogs who ended up with me last year, just before he entered McGrath – I mean literally just before he entered McGrath, 100 yards from the ramp going up there – he tries to bite the snow and he just slipped and fell flat on his face and hurt his shoulder. It’s one thing if a dog runs and maybe starts to have the tired muscles that you feel as a musher, maybe you could have done things differently. But when you do everything right, and the stupid dog slips. I took another step in a moose burrow, that took him out. So it’s really frustrating when there are things like that. I mean, what are the chances of you having two dogs in a race that just get funny, right? So things like that. And there were a number of small issues.

AKPM: Have they finished their diarrhea?

DS: Yes, it was about 20 miles from Cripple, they started eating like wolves. Back in Cripple, where we rested for 24 hours, the dogs weren’t eating like this. I was really disappointed with, you know, a third of my team at that time, you know, just not getting that rest that we should have. And I guess on that note, I wouldn’t mind being hours late here if I was late for the right reason, like we had stockpiled rest and maybe even transported the right dogs in the sled. But the reason we were late is because we were sick. And we had to take in those dogs that weren’t feeling well – transport them in the sled, many of which ended up being abandoned, anyway. So when you’re late for the wrong reason, I don’t think we have the advantage that normally comes from being behind the more powerful team because of that rest. I think we have a more powerful team.

AKPM: Is there frustration in your voice?

DS: Oh yes. Oh yes. But you can be frustrated and happy at the same time. Believe me, I do it all the time.